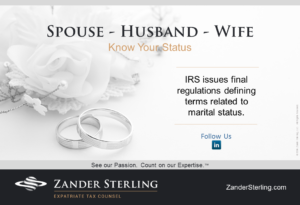 The IRS has released final regulations that define common terms used throughout the Internal Revenue Code related to a person’s marital status for federal income tax reporting purposes.  While the final regulations largely follow previous guidance contained in the proposed regulations, there are some subtle and helpful differences.

In addition, the final regulations provide that a marriage of two individuals will be recognized for federal tax purposes if that marriage would be recognized by the state, possession, or territory of the United States in which the marriage was entered into.

Note:  This reflects a change from the proposed regulations, which referred to any state, possession, or territory of the United States, rather than that in which the marriage performed. This helpful change avoids situations in which a couple would have to analyze the laws of all states, possessions, and territories to determine if any of those laws would fail to recognize their divorce, or would denominate an alternative legal arrangement (such as civil union) as a marriage.

The regulations clarify that the term “marriage” does not include registered domestic partnerships, civil unions, or other similar relationships recognized under state law that are not designated as a marriage under that state’s law, and the terms “spouse,” “husband and wife,” “husband” and “wife” do not include individuals who have entered into such a relationship.

The final regulations provide that two individuals entering into a relationship denominated as marriage under the laws of a foreign jurisdiction are married for federal tax purposes if the relationship would be recognized as marriage under the laws of at least one state, possession, or territory of the United States. This rule allows couples who are married outside the United States to determine marital status for federal tax purposes, regardless of where they are domiciled and regardless of whether they ever reside in the United States.

The final regulations apply as of September 2, 2016.